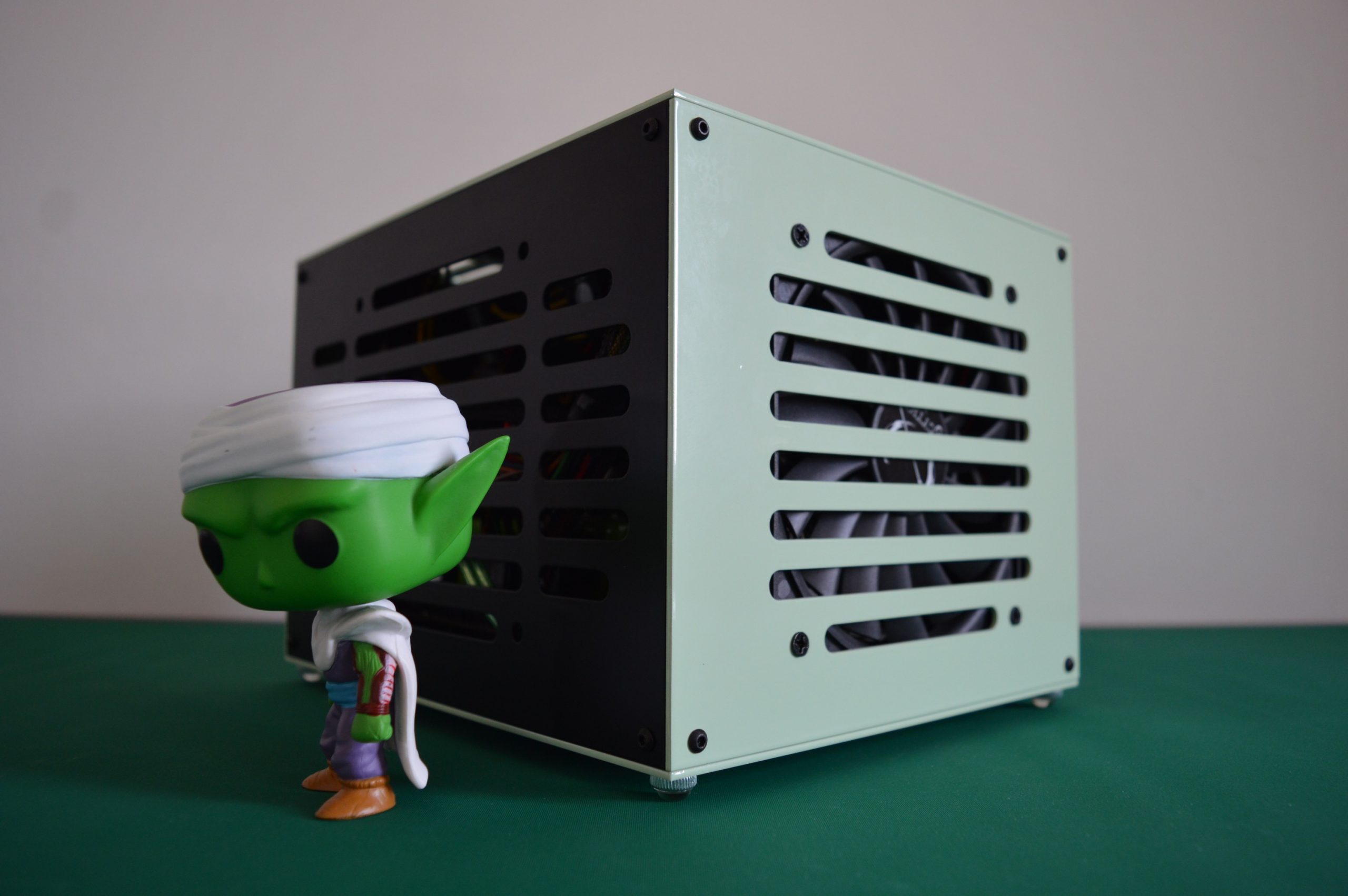 So my brother came to me with a request for a mini PC knowing I have made several HUMBLE cases for the color demonstration/introdutction. He already had a a full tower desktop from around 2014 that he is still using today. He told me that the rig is perfectly fine for what he is using it for like studying and some light gaming here and there. As such he would like to keep the hardware if possible and with that not spending much money on the rebuild.

When I got my hands on the tower I was suprised to see an ITX motherboard inside. I was already prepared to hit up the second-hand market for cheap parts to get this build done but thankfully there were a lot of usable stuff inside. For starters the afforementioned motherboard which is an ASRock with a B75 chipset. For his needs it is indeed perfectly fine and matches the CPU very well. And the fact I do not have to look for an ITX 1150 board is a big bonus! The chip is one of the strongest “non-K” i5 from the 4th generation, the 4690. Pretty high clock speeds at 3.9GHz Turbo and with that a reasonable TDP of 84 W. On the memory side of things he has 2x4GB DDR3 from Corsair. It is a low profile unit so should work with any CPU cooler around. The last usable hardware -from the mini build perspective- were the SSD and the 2 slim PWM fans that were used as case cooling.

The other parts had to be replaced to ITX form factor counterparts to nicely fit inside HUMBLE.

The cooler was a standard Intel, I am guessing the one which came with the CPU. I had an old Prolimatech Samuel 17 laying around from an older build although without a fan. Thought one of those slim Scyte fans could be used on it for some decent low profile cooling as the Samuel 17 is a pretty capable little cooler with 6 heatpipes and a height of only 45 mm.

On the graphics front he has a GTX 970 which is all right in my opinion even for its age. It has decent performance on even modern titles at high 1080p. The only problem is that it is a Gigabyte Windforce one and close to 300 mm in length. So this is the first part I had to get rid of. Luckily I could sell it for a decent price and with that money I could buy a second hand ITX version of the GTX 970, but this one is from ASUS.

One more thing was needed to a complete build and that is a decent PSU. So finding a good quality second hand but clean unit is almost impossible around here and the one thing you do not want to go cheap on is the psu anyway. But still the budget is next to non existent so I had to figure out something. Again, I got lucky as one of the online stores got a sale on the Silverstone SFX 450. It is a non modular unit and only 85+ Bronze rated so nothing fancy but does deliver a decent quality, ripple free current. And doing it quietly even under load.

With the hardware in hand I started the build process. I chose a green (mint?) powder coated set as I knew that is my brother’s favorite color. And by the way the RAMs are green too. Tossed in a 500GB 2.5″ HDD for storage and 2 neon-green sata cables to match the whole theme. One thing I was suprised by is how tall this mini GTX 970 is.

Maybe a 90 degree angle adaptor would have workeded better but I had none of those laying around.

The finished PC has indeed sufficient performance with decent gaming. I could play GTA 5 on 1920×1200 with high settings and stable 60 frames per sec. Although these Scythe fans under load are not the most quiet slim units I used so far but nothing disturbing. And the thermals never went over 65 C under load.

With this build I had the chance to yet again try a different set of hardware and their combination. And I must tell everything fit as intended in HUMBLE. Even found a solution for the taller than average GPU and it’s power connector. But the most important is that I made my brother happy and smile with this unique little beast.

I believe that even if it is a bit dated build can still bring a lot of joy during work or entertainment.