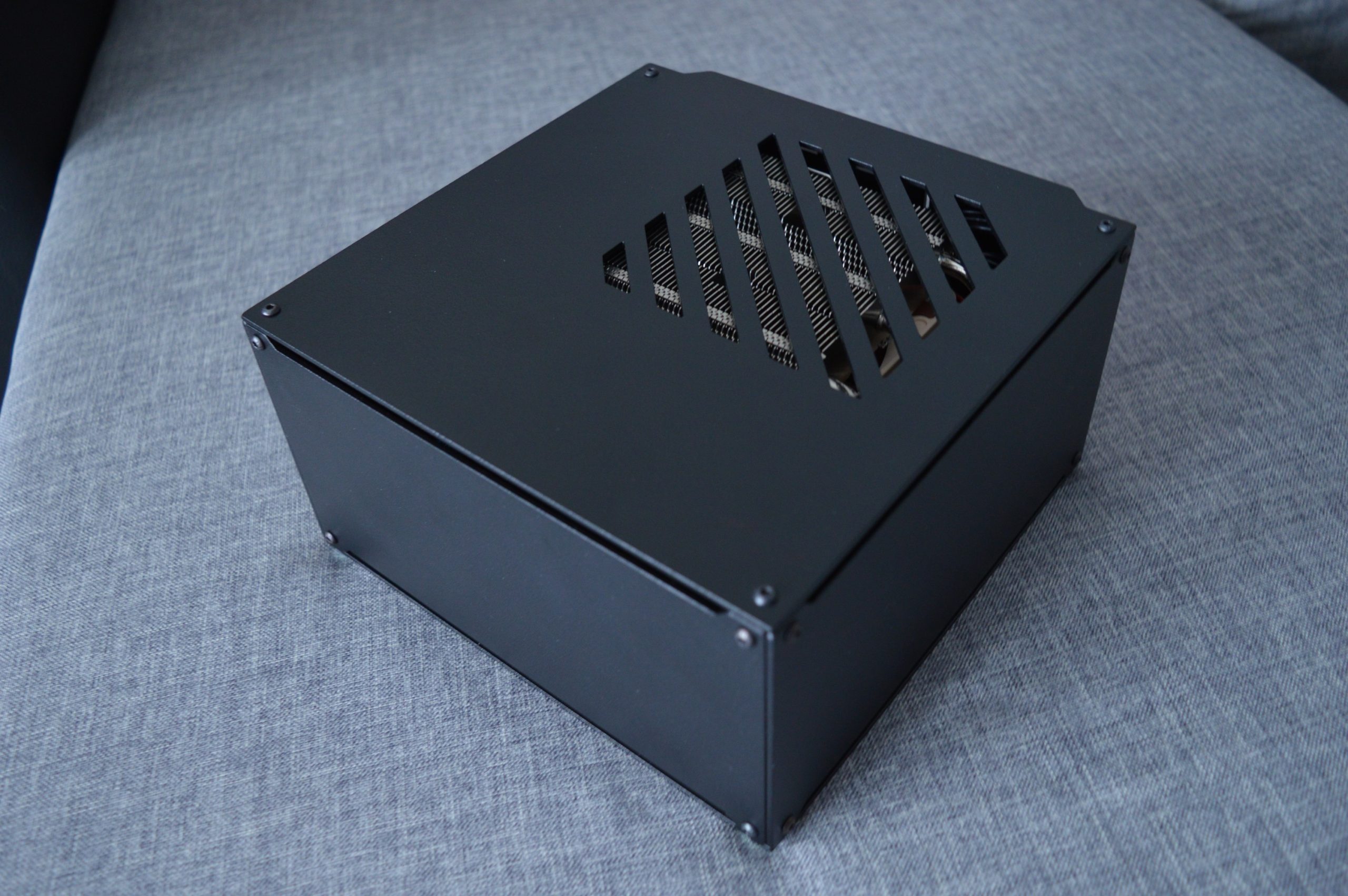 This is going to be the first official build log in one of the new ELFIN ITX cases featuring a Ryzen APU from AMD.

I got this order a while back now for a HTPC in the -then still upcoming- ELFIN mini case. Amongst the requirements were solid 4k@60fps playback, the best possible analog 5.1 audio output without a dedicated DAC and space for storage.

Thankfully all this can be achieved in the ELFIN and since gaming was not a requirement, there was indeed no need for a dedicated GPU.

The parts I received for the build are not the newest offers from the red side but again I can’t blame anyone as the PC part prices are kind of ridiculous on this side of the globe anyway.

For the task in hand though, these will be plenty and will do the job without any issues whatsoever.

The core of the system is the AMD Ryzen 2400G. A 4 core, 8 thread chip that has integrated Vega 11 graphics. The good thing about this chip is the overkill performance for flawless 4k decoding compared to the price. It’s kind of cheap for what it can do to be honest. And for a specific HTPC/media center task I think it would be a waste to buy anything more powerful or expensive.

The 4k playback is all good, but worthless if not paired with te correct motherboard. And that’s where the ASRock Fatal1ty B450 Gaming-ITX/ac comes in the picture. This board has a HDMI 2.0 output for 4k @ 60Hz playback with HDCP 1.4 support to go hand in hand with the 2400G.

The the main attraction when getting this board was the audio. Namely the onboard Realtek ALC1220 Audio Codec. This is a really high quality codec that even more expensive or newer boards don’t have. It has a 120dB SNR DAC with 7.1 channel analog Audio output. Perfect for those beefy home theater amps that didn’t have HDMI inputs back in the day yet. Just like in my case with my push-pull transistor 7 CH Onkyo! 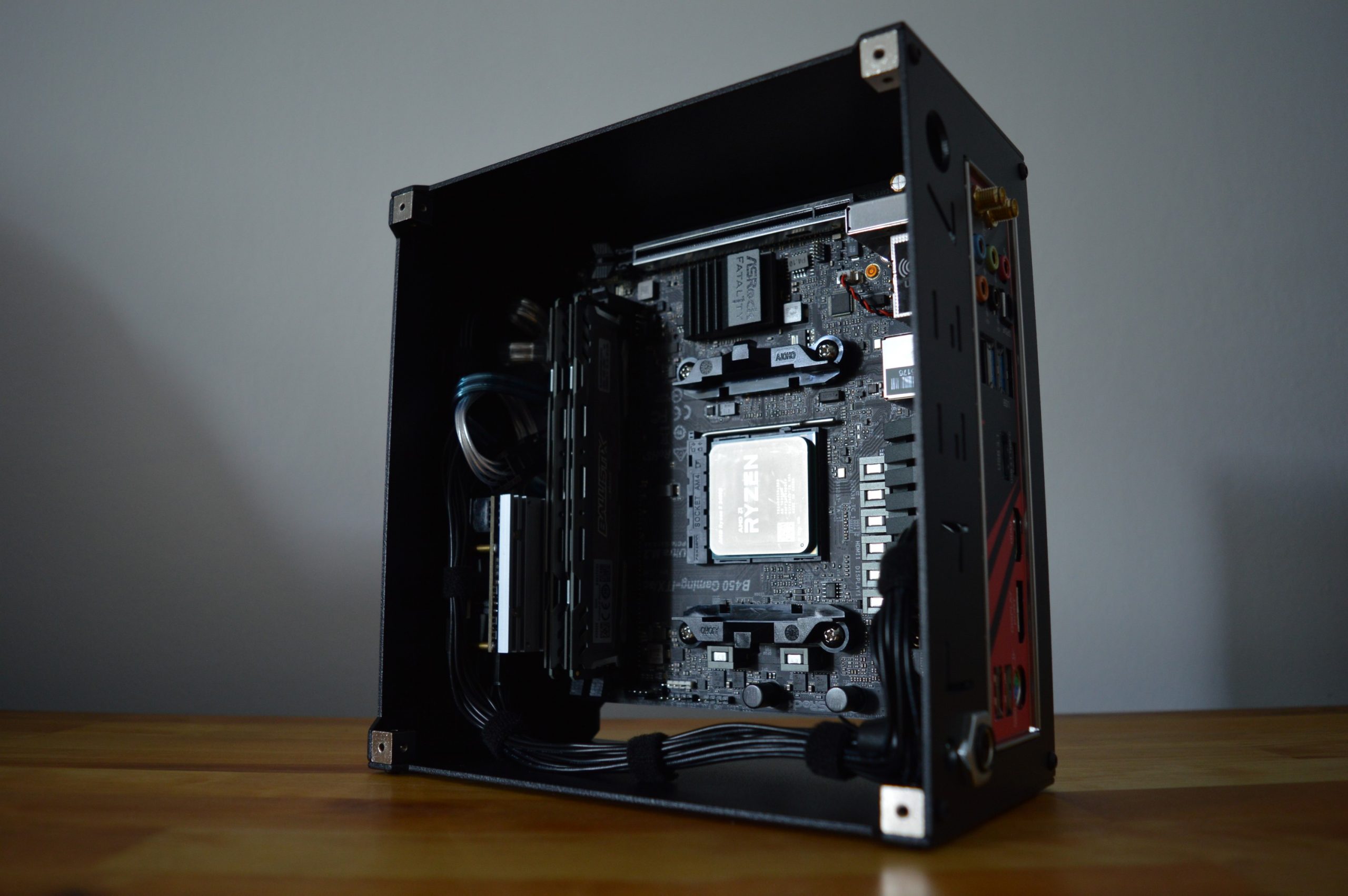 RAM was a pretty straightforward choice with the Ballistix series form Crucial. In one hand the APU needs a somewhat fast memory for the Infinite Fabric to have a nice ratio so 16GB of 3200MHz RAM should do it. On the other hand as I needed something that is going to fit under the CPU cooler. It is really that simple.

While we are at the cooler, ELFIN supports 70mm high coolers maximum. And since this APU can get kind of warm while doing some work the choice has fallen on a more chunky option. Noctua’s NH-L12S is a very popular cooler amongst the SFF crowd and since it does not fit in the HUMBLE this was the perfect opportunity to try it out in the ELFIN.
It’s an easy enough to install type of cooler with decent performance while beeing virtually silent, I’m not convinced it’s a better choice than lets say the L9 or some more cheaper options like the C7 or Samuel 17 with Noctua fan swaps.
I used enough LP coolers in the past to know for sure, this one is way overpriced.

As ELFIN is a much smaller case with less components than normal the install itself was somewhat easier and faster than in the HUMBLE. The only cable management that is needed is around the Pico PSU and the SATA cables if present.

There is two spots under the motherboard tray for 2,5″ drives and in this case both of them are populated with 2TB Hard drives from Seagate. Nothing fancy just good old regular storage for movie and music collections, so no raid.
The motherboard itself has a single m.2 socket for a NVMe SSD on the backside of the board. A 512GB drive is used here partitioned in 2 halves. One for the system and one for downloads and whatnot.
There was a requirement for future SSD upgrades so the PCIe socket is left unpopulated for now. Later on it will receive a PCIe to m.2 adapter card to house one or two more SSD drives there.

The power side of the build is obviously the HDPLEX 200W DC-DC Pico PSU. It’s simply the best and only choice for high quality components that need more than 120-140 Watts of power. Pairing it with a DELL 200W power brick is the perfect combination.

After setting up the system and taking it for a test drive it was indeed mind-blowing that such a small computer can house so much power, staying silent, having huge storage and consuming a really tiny amount of power.

Although it was a cloudy day I took some photos of the build which you can check out below.